The easiest way to set up a bolt project is to use the command line. Where you want to set up the site, run the following commands:

This will give you the foundation for your Bolt project. 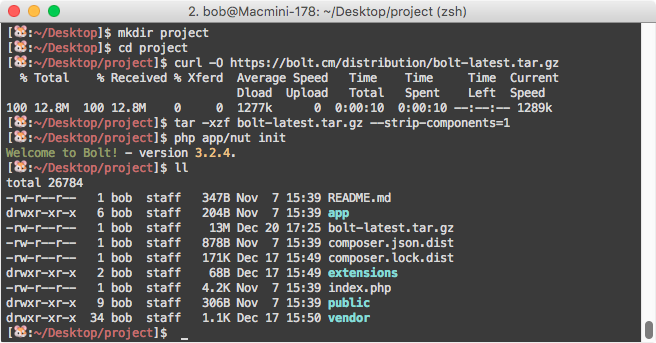 Before we actually start developing, we need to take care of a few things:

To get started properly, we’ll use a config_local.yml file from the get go. This file allows us to set some slightly stricter error settings, so that it’ll be easier to spot (potential) errors. This is the exact opposite of what we’ll do on the production server, since there we want to be lenient and not show any “information leaks”.

We’ll get the boltflow shell script, that we’ll use to keep our Bolt project current. Both in regard to the latest Bolt version, as well as what’s in our git repository:

This will create the file, and open it in an editor. You should add your database credentials in this file, so that they will remain local to the current environment, and they don’t get committed to the git repository we’re about to set up.

Setting up a git repository

You can use any git provider you prefer, as long as you use a form of versioning control for your projects. We’re going to create a new repository, and add our project files to it, using the .gitignore that comes with our standard setup. 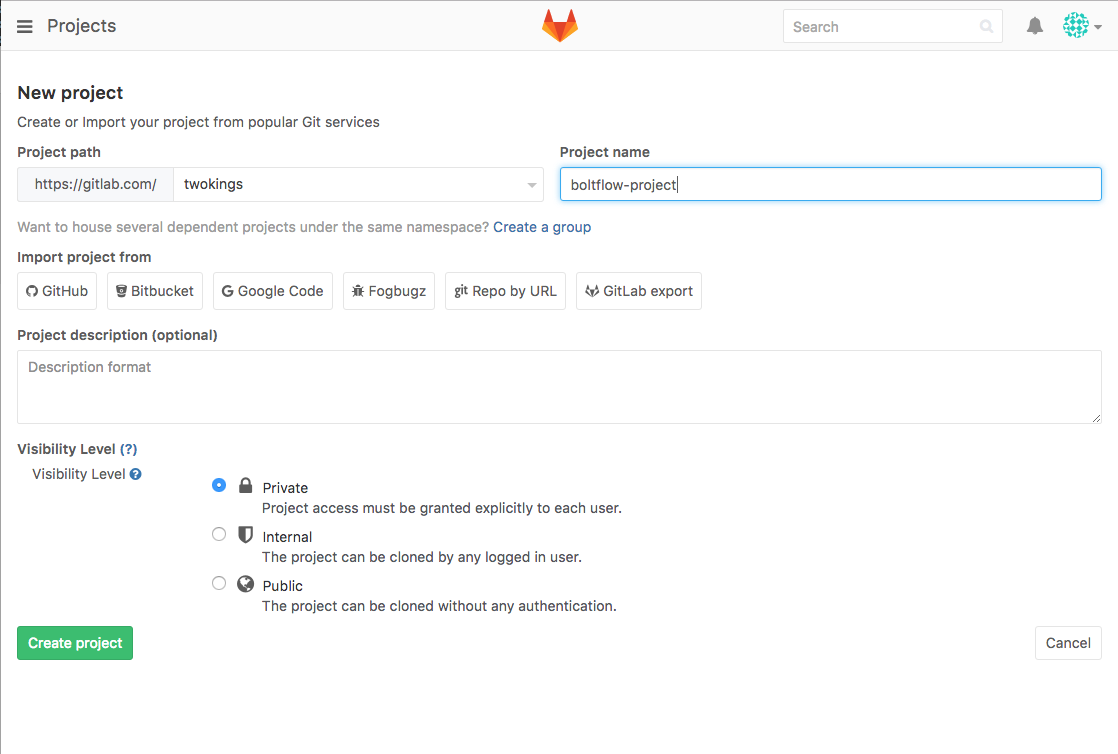 (Image: Creating the project in Gitlab) 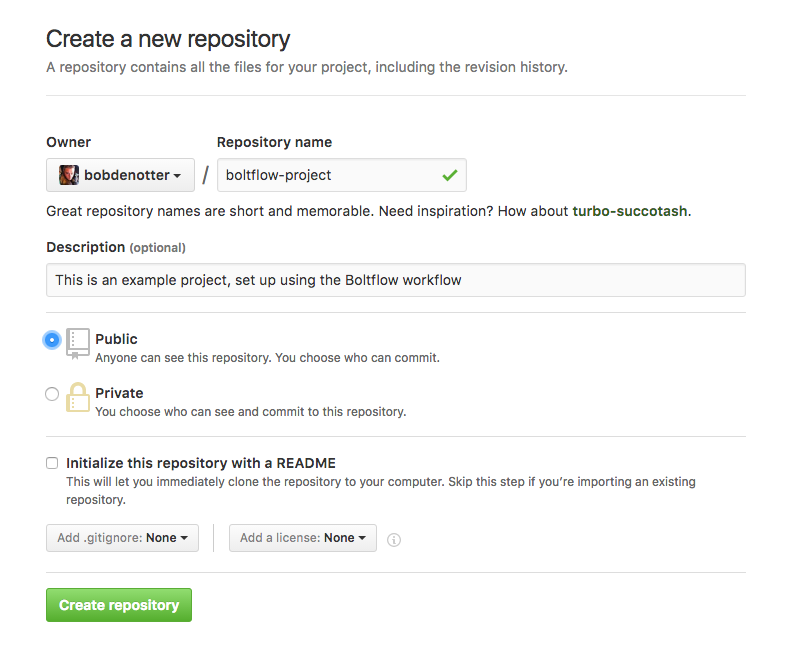 (Image: Creating the project in Github)

Note: Be sure to set the projects visibility correct. If you’re working for a client, you’ll probably want to set it to “private”. If you choose to keep it “public”, verify that you’re not going to store private data or database credentials in your repository.

After creating the repository, Github (or Gitlab, or Bitbucket) will provide a few helpful options to populate our new project’s repository. Instead, we’ll use what we already have for the initial commit. Before hopping back to the command line, note the full SSH path to the repository, because we’ll need it.

Back on the command line, set up our local install to use the git repository:

Where {path} needs to be replaced with the SSH path you’ve noted above, obviously.

At this point you’ll have a working git repository, that looks like bobdenotter/boltflow-project. 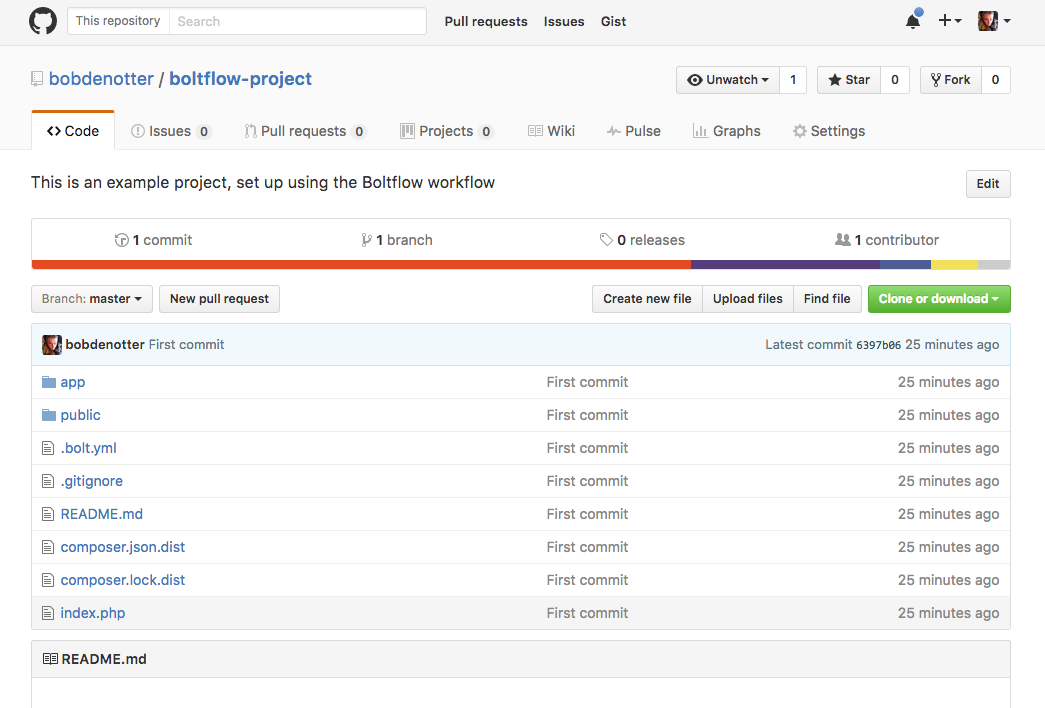 When you're setting up a Bolt project using the .tgz distro, you're already getting the vendor/ folder with all the components pre-installed. However, we're going to be continously updating our dependencies as well as Bolt itself.

Run boltflow.sh again, to set up our extensions, cache and files folders:

To work on your project, you’ll need to configure a webserver to serve Bolt in a browser. Most of Bolt’s files are outside of the so-called webroot, which means that your bolt project folder (the one that contains app/ and vendor/ is not the folder that should be served by your webserver. The one that should is called public/ by default.

For more information on why this is good practice, read: Outside the web root.

If you have no control over your webserver, and it is configured to use another folder, there are two options available:

Create a symlink from what the server uses to the public/ folder. For example, something like ln -s public html if your webserver uses html instead.

Rename the folder public/ to what it should be. You’ll need to fix three additional things in this case:

As you might've noticed, we just added all files to git, without scrutiny. We were able to do this because the Bolt distibution comes with a default .gitignore file that's a good fit for how we choose to work. Right now, there's only one modification to make: If you added your database credentials to a new config_local.yml file, we can actually put config.yml into git.

To do this, edit .gitignore and comment the following line.

By now we'll have changed a handful of files since our initial commit. Run git status to see what has changed:

If this looks good, commit these files to your git repository:

Perhaps the easiest way to get a server up and running is by using PHP’s built-in webserver. You can start it from the command line: 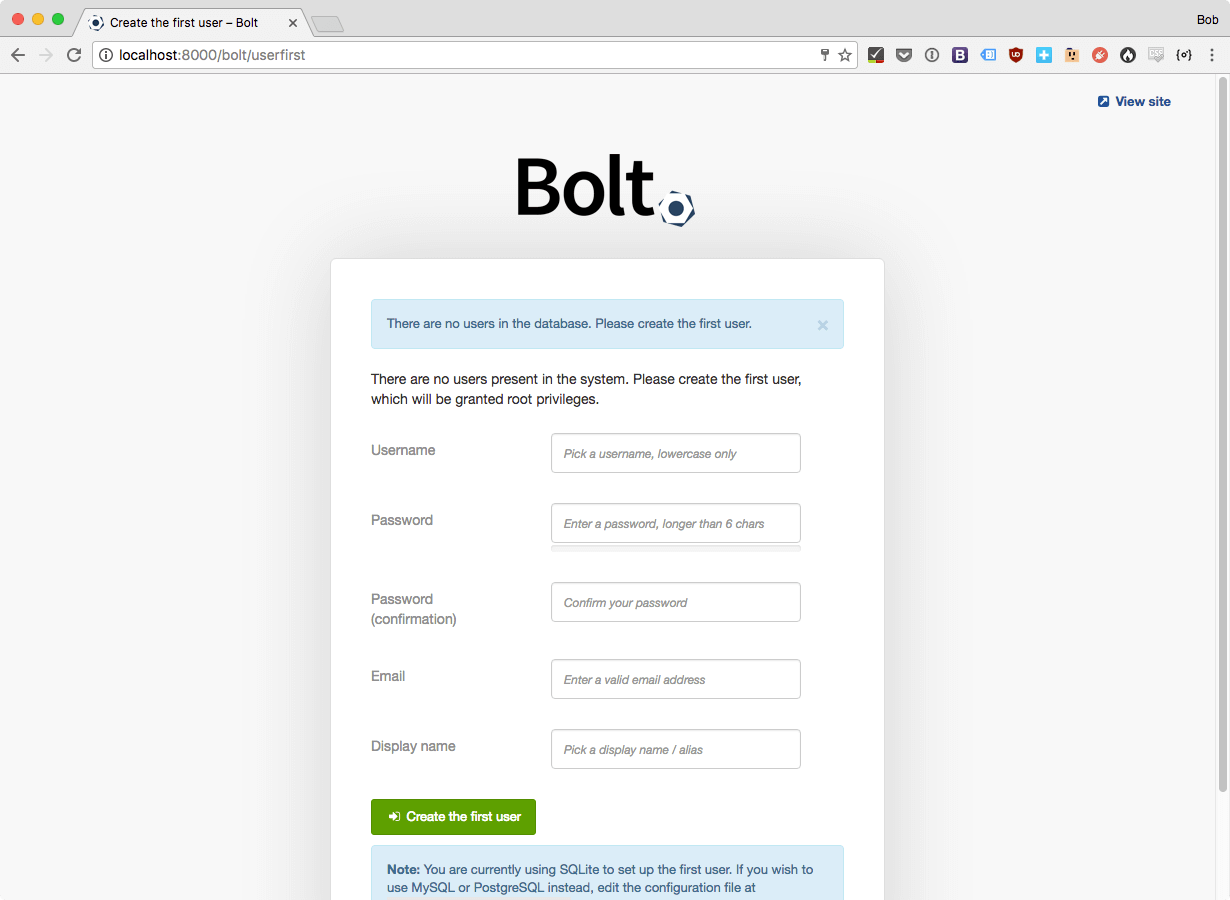